Took a little longer of a break from the game than I thought I would. I’ll explain why in a little bit… well, it was probably explained in an earlier post.

Another thing I would like to have in the house I’m planning on building is a detached garage area. One that can not only fit the cars I previously bought, but also the RV, jetskis, ATVs, and every other vehicle I ended up buying. Maybe even build in my own auto shop area where I can hire a team of personal mechanics to do maintenance for me in my own garage. Sure, I took an auto shop class in college, but I’d rather have my car worked on by someone who really knows what they’re doing.

I think a personal auto shop area is a bit much, but then again, so is buying 11.7 acres of land to build a house on. I do want a covered area to park all the vehicles so that they’re not all sitting out in the So. Cal. sun, so it’d be nice to have a huge garage. Something kind of similar to the warehouse of the office I used to work in would be nice, but maybe at least 3x the size of it.

Ooh, I found an old picture I took of the warehouse. It was taken with my old Nokia 3220, so it’s not the best quality pic… I wonder if I have any pics from my digital camera. Anyway, here’s what the warehouse looked like (before we moved that computer inside the office): 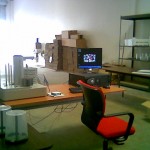 I definitely would want a garage bigger than that since the warehouse could only fit at most one RV & one car.

And the reason why I haven’t posted in a while is because I’ve been playing around with my birthday gift to myself, the MacBook! Got it on July 21st (the day I thought I would post a new game entry). I’ve been trying to find the Mac equivalents of the various applications I use in Windows. I haven’t really installed much onto it so far. It’s definitely a different experience than XP, in a good way. I love it!

Hopefully, I won’t be buying another computer again for a while. It’s only been 9 months since I bought my Asus Eee PC, where usually I would use my computer for a few years before buying a new one. But like I said, I tend to splurge on my birthday and the MacBook was definitely worth it!

This site uses Akismet to reduce spam. Learn how your comment data is processed.